Kelvin Krott, aged 29, joined Operational Group in 2017 and is service co-ordinator for German and Dutch services, based at our office in Kleve, Germany, which is also his hometown. 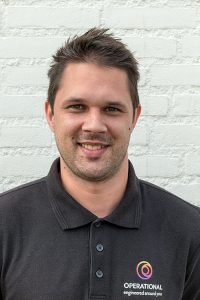 After school, Kelvin undertook an electrical training course over for 3 ½ years which was divided equally between practical and theoretical work. He spent three years working on electrical systems for buildings and cabinets, and then half a year focusing on electrical cabinets for industrial companies.

That was followed by a further two years of electrical technician training and two tree-month programmes which included training other electrical engineers. He was employed at a German engineering company called Fleuren Elektro-Technik, also based in Kleve, before joining Operational Group two years ago.

Explaining his role at Operational, Kelvin said: ”I take care of planning and co-ordination, service and maintenance, liaising with customers and working with colleagues in sales, process and process management.”

“We have a large team based at the Kleve office across service, project, process and sales, plus others in sales and support. In addition to working with Operational staff in our Kleve and Benelux office, I also work closely with staff from Operational Group offices in France, Spain and the UK.”

“My work takes me to various countries around Europe. I typically work with clients in industries where heat and solvents are used in manufacturing processes, such as print and packaging. I enjoy the work, seeing different countries and meeting clients across a range of fascinating industries.”

Away from work, Kelvin is spending a lot of time with his wife and children, he enjoys playing football, futsal and computer games.

He said: “I play futsal for a university team called HSRW in Kleve, which is great fun. The players come from all over the world and we are like one big family.”

“I support the German football club 1.FC Köln (1.FC Cologne) and always look forward to the derby matches which are great events.”

Speaking about computer games, he added: “I’ve been playing games online for years. I enjoy playing team games with 15 to 20 other gamers based in places including Berlin, Munich and Hamburg. It takes a great deal of organisation, discipline and commitment to keep this team together, which has been playing for over 12 years.”