Stephen Maddock, 34, is a service engineer at Operational Group.
He joined Operational Group earlier this year and has extensive electrical engineering experience including working on some of the world’s biggest offshore wind turbine projects in the North Sea and Irish Sea with UK, German and Danish companies. 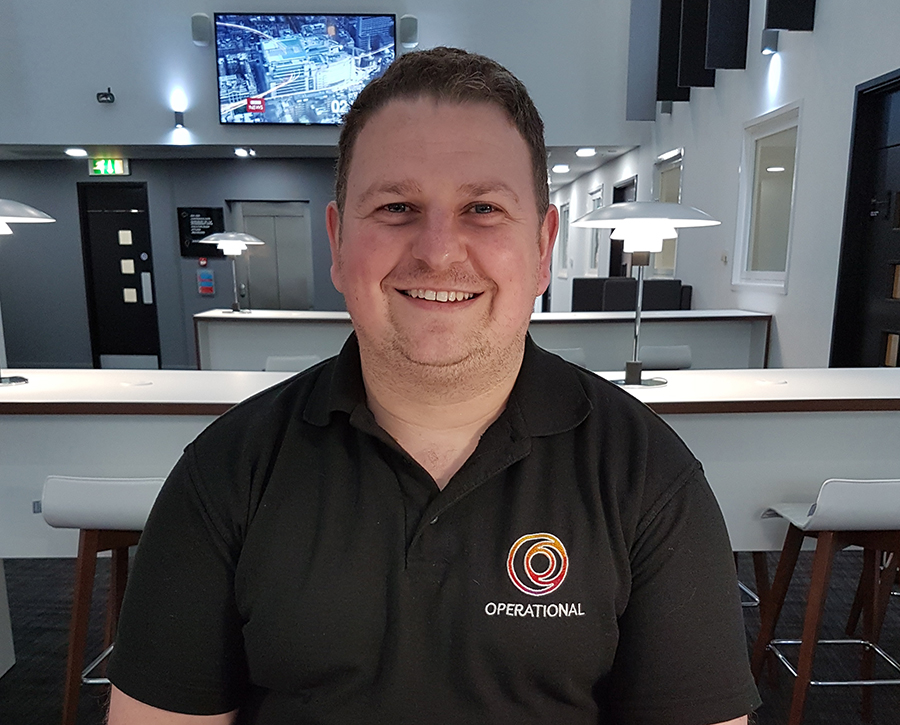 He grew up in Blundellsands, north of Liverpool, and attended Holy Family RC School in Thornton.  He then completed a four-year electrical apprenticeship with Rolls Royce Power Engineering in Bootle, working on gas turbine powered generators and compressors for offshore and onshore projects.

Then Stephen studied an electrical and electronic systems degree at Liverpool John Moores University while working part-time in administration for P&O Ferries.

After university, he joined Merseyside-based Offshore Painting Services and worked on offshore wind turbine electrical and maintenance projects. The role took him to the Gwynt Y Mor windfarm development off the north Wales coast. It is the fifth-largest operating offshore windfarm in the world with 160 turbines measuring 150 metres in tip-height above the sea.

Stephen recalled: “I worked on installing cables and servicing on Siemens 3.6 megawatt turbines. It was an interesting and challenging environment. If the weather was bad, the waves could be two metres high and the service boats that took us out to sea would be rising up and down.”

“Teams of four workers would typically working on a turbine. Each turbine had an emergency shelter inside with ration packs, lights, communication equipment and other facilities for workers, if they were to get stranded in really bad weather. Luckily, I never had to spend the night on any turbine – but it can happen.”

Stephen’s next position was back on dry land with Endurance Wind Power, focussing on smaller wind turbines typically used by farmers. He serviced major component exchanges for turbines ranged from 50 kilowatts to 225 kilowatts and provided solutions for any issues or problems.

He then returned to Offshore Painting Services and worked on North Sea windfarm engineering projects with Siemens at Hull, were turbine blade components were manufactured for the Race Bank windfarm off the Norfolk coast. Pre-assembled blades and components were transported by sea from Hull on jack-up vessels to Race Bank, with final assembly completed offshore.

Next, Stephen returned to the Irish Sea, servicing and upgrading turbines at the Burbo Bank windfarm in Liverpool Bay, four miles from the coast. That project was operated by MHI Vestas Offshore Wind, a joint venture between Vestas Wind Systems and Mitsubishi Heavy Industries with Denmark’s Orsted.

Another Irish Sea project took him to the Walney group of windfarms off the coast of Cumbria, again developed by MHI Vestas.

His final offshore work was 55 miles off the coast of Germany at the Borkum Riffgrund turbine development, which is one the biggest windfarms in the world. The development included MHI vestas and Danish power company Orsted.

Stephen said: “During that project, I stayed on a hotel ship, known as a service operation vessel, with a team of 70 technicians. We worked day or night shifts for 14 days and then had 14 days off.  The accommodation onboard was good with games rooms, play stations and a cinema. The food was nice, too.”

“I worked with lots of German and Danish engineers. The European wind industry includes many German and Dutch engineering businesses and I enjoyed meeting engineers and clients from different countries.”

“I still do some travelling with Operational Group, which I enjoy, and we have a network of Operational Group offices across Europe. However, I’m also enjoying being home in the UK more often than I used to be.”

“Operational works with many different clients across a variety of industries, which is fascinating. Each factory or industrial site has different procedures, systems and products. So, I’m learning a lot more about different industries, which keeps me on my toes. Each day is different, which I enjoy.”

“Working with the Operational team is good too. It’s a close-knit team and everybody knows their role well. It’s a business that’s developing and really going places.”

With Operational, Stephen is upgrading his professional accreditation and skills with IGAS and ACS gas engineering training.

Away from work, Stephen is enjoying life as a dad. He has a two-year-old son, Jenson, and has given young Jenson his very-first Liverpool FC kit.

Stephen said: “I’m a big Liverpool fan and one of my hero players is Ian Rush. When I was a boy, I used to watch Ian Rush on TV scoring loads of goals. I also play five-a-side football at the Playfootball.com pitches in Thornton.”