We’re delighted to announce we have appointed Sean Martin as our new Sales Manager.

Sean brings with him a wealth of engineering experience within thermal system optimisation. 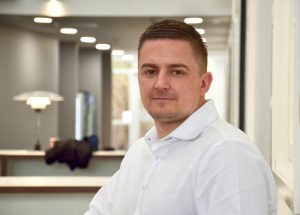 He has developed his skills and experience from being a time-served pipe fitter/welder to becoming a project manager and then sales manager, working for a number of UK and international heat recovery and energy specialists over the years.

Sean started his engineering career as an apprentice pipe fitter/welder for a company who used to design, fabricate and install waste heat economisers and carbon filtration systems.

He later moved to a HVAC contractor who are based in Greater Manchester where he managed the retro-fitting of HVAC systems for branches of a high street bank across the north of England and Scotland. Whilst completing a two-year HNC in building, at the former Manchester College of Arts and Technology (MANCAT).

From there, Sean became UK Market Manager for a leading international manufacturer of steam and hot water equipment. Based in Manchester, he worked with blue-chip clients including major global petrochemical, pharmaceutical and food manufacturers.

Sean said: “I’m delighted to have joined Operational Group. I’m really looking forward to meeting clients to discuss how we can provide added value to them”

“At Operational, we focus on listening to customers and providing value-added services to help them achieve more. By understanding their problems, we can use our expertise to improve efficiencies and lower energy costs”

Away from work, Sean’s passion is motorcycle road racing. This season sees Sean’s return from a two year sabbatical from the sport, in which he will contest for the Pre Electronic championship which is run by the Wirral 100 Motor Club.