One of our directors, who has played a key role in community volleyball clubs, is helping to take two teams from the north-west of England to a UK national final in May.

He first began playing with Warrington Volleyball Club then helped to created Bridgewater Diamonds Volleyball Club, which he was involved with for 20 years.

Paul said the club promotes volleyball to all, men, women, and children over the age of 11 years, the link with the Wolves Foundation helps to also promote social inclusion. 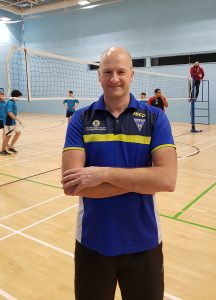 Matches and training are held on Sundays and Tuesdays at the Orford Jubilee Hub in Warrington.

Paul said: “In the past, there was no volleyball scene for children in Warrington outside of a couple of schools, but the Warrington Wolves Volleyball Club supported coach’s and Volleyball England and in 2012 a kids club for 11 to 16-year-olds was created”

I have completed a number of coaching courses, child protection and safeguarding courses, and we’ve had youngsters competing at a national level.”

Other than the good work of a few clubs, Paul said there has been a lack of co-ordination to promote volleyball across the north-west of England for boys.

He said: “There’s been a drive to develop a training camp for under-15 and under-17 boys, the North West VolleyballAssociation has appointment Peter Guernari to drive the new training and initiate, we are now aiming to attend a national contest in Kettering, Northamptonshire, in May and taking two teams of young lads to create U15’s and U17’s squads. It’s a great development, and we have 5 of our young lads involved with the squad”.

The players will feed back into their local clubs with the aim of developing volleyball further in improving the quality of players in the North West. ”

Adult volleyball is also enjoying success within Warrington Wolves Volleyball Club, the 3 men’s teams are performing well in local Merseyside leagues. Team A is currently top of the league, Team Wires is top of the second division and Team Wolfpack are hunting down 2nd spot. Our ladies team are also fighting for top spot in the Merseyside League second division Paul said.

Junior players have started filtering into our adult teams and there are hopes that students currently playing volleyball, will return after university, where the sport is popular, back to local clubs in the future as adult players and coaches. With the new U15’s/u17’s initiate stronger links are being built with Volleyball England nationally.

Paul added: “We’ve had 80 kids pass through our junior club in Warrington over the past six years and we’ve got 24 attending regularly at Orford this season. This development with Warrington Wolves Foundation and North West Volleyball Association is really helping promote the sport in our town and region. It’s a great programme which takes kids at grassroots level and gives them the opportunity to play at higher levels.“