Abatement and heat recovery in the textile Industry

Our Client operates two drying/heat setting stenter ovens where textile fabrics are dried and heat set after a variety of treatments are applied from dyeing to fire retardants, the fabrics contain knitting oils, which if unabated can cause a dense plume of oily smoke from the stenter exhaust ducts when being discharged to atmosphere.

Operational studied the stenters and the exhaust temperature was found to vary between 120 oC when drying and 160 oC when heat setting. This gives significant scope for heat recovery, especially as large volumes of hot water are used in the dyeing process, this would otherwise be heated using Steam. The exhaust flow from each stenter was between 7,500Nm3/h and 15,000Nm3/h. The extraction system would therefore need to be variable to compensate for the changing inlet conditions.  As part of the abatement scheme the exhaust gases had to be cooled to be able to initiate the condensation of the knitting oils in the air. It was then necessary to design the heat exchangers to maximise the recovered heat while still achieving the required condensation efficiency and maximising the hot water temperature to give the best heat density.

The exhaust air from the stenters contains fabric fibres as well as the knitting oils, significant amounts of water vapour and other contaminants. This made the selection of the heat exchangers critical. Firstly a two stage filter mesh was installed to reduce fouling. The fin pitch of each of the three banks of heat exchanger then also had to be considered with fouling in mind, with a wider pitch at the start to reduce the likelihood of blinding due to fouling on the air side from fabric fibres and condensate. The heat exchangers were also designed as a cartridge insertion type for improved maintenance if removal was required.

With the fouling in mind the system was also installed with fixed cleaning nozzles to allow a wash down cycle to be used when the system was offline, this would remove some surface fouling and reduce the required maintenance. An automated wash system was also incorporated into the first two passes of the ESP system utilising the same pump and filter. The water could be pre-heated using a steam to water plate heat exchanger, the pre-heat could be carried out offline.

Once the air was cooled to the required temperature, to allow condensation of the contaminants to a liquid phase although in the form of very fine droplets as a fume. The initial step is to pass the fume through a Euroklean filter element to initiate the coalescing of the fume into coarser droplets to allow more efficient capture of the fume. The air is then passed through the tubular ESP (Electrostatic Precipitator) section of the plant. At this point a very high voltage of 15,000Volts is applied (although only a small current of around 40mA per pass is drawn. This charges the liquid droplets and causes them to drift to the earthed tube walls where they are collected and drained. The ESPs have an electronic control circuit to monitor the current and voltage, this allows the possibility of arcing to be minimised and the efficiency maximised, while giving detailed fault analysis. Five passes of ESP are installed to maximise the accumulative efficiency of each pass. Before passing through the pressure controlled exhaust fan the air passes through a mist eliminator pad to capture any re-entrained liquid carry over from the ESP units. The fan outlet is then acoustically treated with a silencer to reduce the discharge noise to an acceptable level. 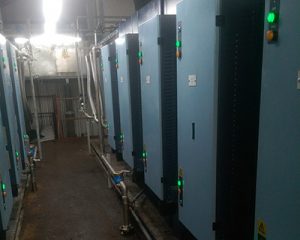