One of our senior process engineers has helped a cycling club raise hundreds of pounds for a brain injury charity in memory of a cyclist and father-of-three who died after a fatal hit-and-run accident.

Neil Shand helped North Cheshire Clarion Club hold two long-distance cycle rides to support the Headway charity in memory of Terry Brown, a former club member from Warrington who died after being struck by a car while cycling to work in 2014.

Mr Brown, who was 47, suffered a serious head injury in the accident at Bold Heath and was taken to Aintree University Hospital, Liverpool, where he died. The motorist responsible for the hit-and-run collision was later prosecuted and jailed for seven years for causing death by dangerous driving.

North Cheshire Clarion Club recently organised two rides of 100 miles and 125 miles through Cheshire and Shropshire taking in places with ‘mere’ in their name such as Delamere, Ellesmere and Mere. The rides started and finished at the village of Lower Whitley, near Warrington.

Cycling club secretary Neil, said: “Terry Brown was a member of North Cheshire Clarion Club, and was a popular and well-respected 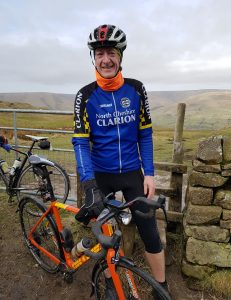 “In holding the Mere-themed cycle rides, we wanted to support the Headway charity. It helped support Terry’s family and does excellent work on all issues relating to brain injury, from helping victims’ families to supporting professional and medical research.

“The two rides were well-supported with 130 cyclists taking part, both members and visitors. The rides raised £170 and the club then added more, making a total donation of £350 to Headway.”

North Cheshire Clarion Club holds a range of events including road and off-road cycling, road and track races and time trials. The fundraising Mere events were audax rides, which are long-distance rides within a set time limit and taking in specific locations.

Audax rides are compared to a mix of orienteering and club rides, with success measured in completing a distance and passing through set control points. Cyclists have a route to follow, defined on a cue sheet or GPS technology.

Control points are typically cafes, an organiser, a shop or cash machine where cyclists get a receipt, and point of information, such as answering a question to prove you have been somewhere. Typically this could be a distance shown on a sign or names on a monument.